The goal was to get my new bonsai out of its pot and directly into the soil of my terrarium. I had some other maintenance issues to do too. So this past Sunday was the day. I removed the ficus from its perch inside my aquarium garden where it had been living, in its own pot, elevated from the soil surface, since I bought it in May from Bonsai Boy of New York. 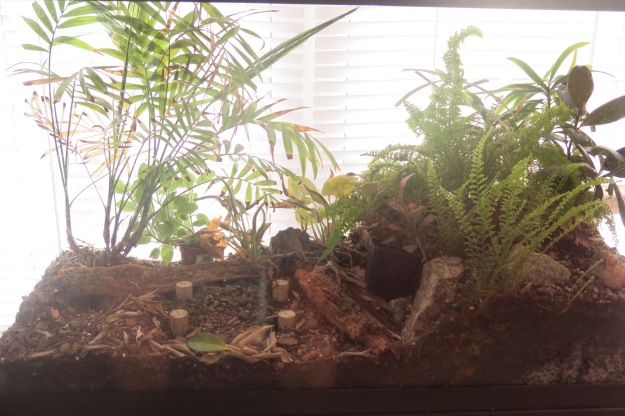 In this photo you can see the pile of leaves this bonsai had been shedding, and the pillars I used to elevate it from the surface for drainage. I took the whole thing out to the deck and began clipping, and cleaning, sifting and repositioning. 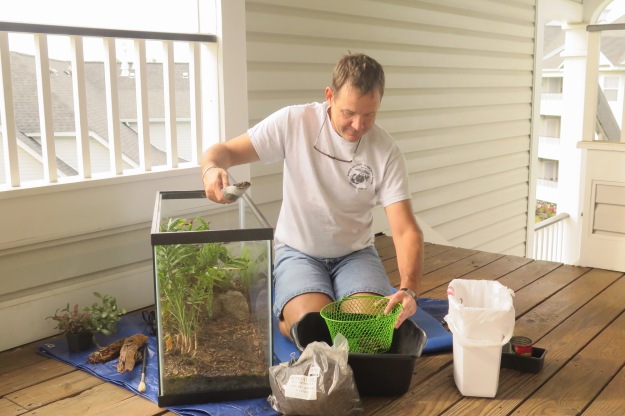 I sifted the soil to get out the large peices of mulch.  My terrarium soil is a bonsai mix, and that has some mulch in it for organic matter. I get it from Merrifield Garden Center. I also get my terrarrium plants there. They have a whole terrarium section.

What a looker this one is….

The plants that were thriving were left alone, and most of them were. I had two leafy creepers (don’t recall the official names) that needed to be permanently planted, as they were also living for several months, in the terrarium but in their own little pots. These got planted near the front. I know they’re going to make a bee line to the back, where all the sunshine comes in from the window.

Here is the bonsai that still looks remarkably good given the number of leaves it has shed in the last month. It’s a Ficus Reticulosa. 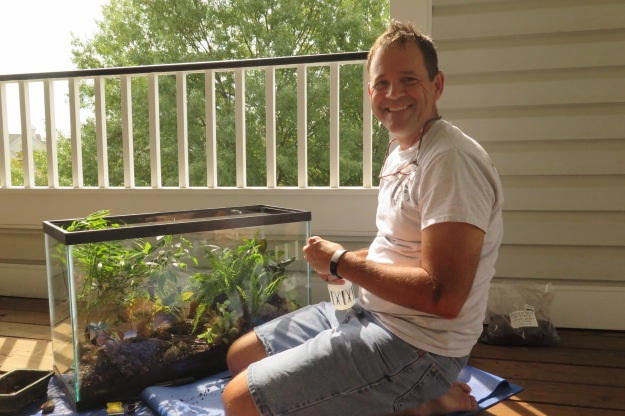 I got everything in its place, and cleaned the glass really well, which always makes the garden look good. I placed some deadfall wood with moss and a few stones, then gave everybody a good bath and watering and took the whole thing back inside.

I turned the bonsai 90 degrees to put a bare spot towards the sunlight, hoping it will fill in. You can see that it’s still dropping leaves, but it also has a lot of new shoots. Time will tell if it survives. If it doesn’t I’m afraid I’m done (again) with bonsai. I’m just not that good at it.